History of Tyria: The Mursaat and Seer Wars

At some point in time, still unclear in history but around when the Great Dwarf wrote the famed Tome of Rubicon, a war was waging.

Having betrayed the elder races during the last rise of the Elder Dragons, fleeing and leaving them to their end, the mursaat returned.

A version of the Tome of the Rubicon, obtainable in Guild Wars 2 through the Mystic Forge.

How they returned, when they returned, or why they returned is still unknown. This was is of the vaguest topics in the history of Guild Wars. Information is hard to come by and it is often modified with speculations. However one thing is for certain; the mursaat and the Seer fought.

The true cause of the war is still very much a mystery, but it is not out of place to claim that the war between the mursaat and the Seer was caused by the betrayal. When the Mursaat betrayed the elder races during the awakening of the Elder Dragons, fleeing using their phasing magic, they left the other races to their doom. Why?

Perhaps it was arrogance. Perhaps they felt superior than the other races and wished them eradicated? Perhaps they thought themselves as the current pinnacle of power having the abilities to flee from the Elder Dragons destruction and the other lesser races were nothing but beings to be consumed by the Elder Dragons. The fact that the mursaat fled the war can give insight to this, and for now it is the only speculation Tyrian historians have to explain the war.

As for the Seers… Why did they fight? Perhaps it was retaliation? Maybe it was to bring justice for their betrayal? Did the Seers always consider the mursaat enemies? Perhaps the Seers knew through the manner in which the mursaat represented themselves that a feud would one day come, and this was the breaking point to begin the war? 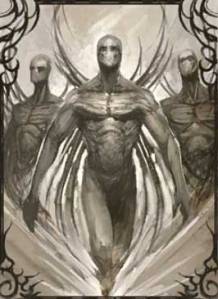 It’s uncertain how long the war lasted, but what can be told is how it ended. The mursaat possessed their destructive magic known as Spectral Agony which would obliterate their enemies in a single, terrible blow. As was the fate of many brave heroes of Tyria during the fulfilment of the Flameseeker Prophecies. The Seers were able to develop a defence to their magic, however it came to late.

The Seers were defeated, almost eradicated from existence on Tyria. Though their ancient relics and remnants of a once great civilisation stand testament to the power and legacy they wielded, they were lost having endured the havocs of time. Heroes of new and old have visited their ruins, unsuspecting of the antiquities they have crossed.

This war leaves many questions of this vague point in history. How did the mursaat posses such immense power? Why were the Seers not able develop their defence against Spectral Agony in time to preserve themselves? What were the other elder races doing during this war?

The history of the mursaat and the Seer can hold the deepest secrets and answers in the lore of Guild Wars. We shall see if they are built upon in Guild Wars 2. 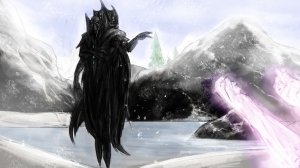 Fan representation of the Seers. Credit for this amazing art can go to Gannadene at deviantart.com.

The Isles of Janthir await.

This entry was posted in History and tagged Elder Dragons, Great Dwarf, Mursaat, Seer, Tome of Rubicon. Bookmark the permalink.

9 Responses to History of Tyria: The Mursaat and Seer Wars